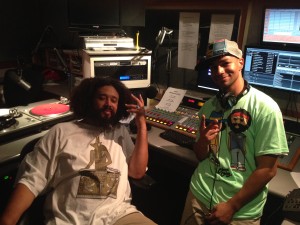 Transmitting live from the West Coast of the Milky Way, our weekly radio show explores high quality music of every genre.  With no commercials and no playlist, All Of The Above is a non-stop journey through sound unlike any other found on today’s airwaves.  Host Django Craig and DJ Ben Vera teamed up with the specific vision of achieving something ground breaking and sky shattering.  What resulted was not only genre bending but also lively and infectious.  Using rare vinyl, hypnotic drums and eclectic grooves we take you on a journey into sound and what is possible when all limits are removed.  All recordings are 100% live and in free form with nothing premeditated.  Anything  and everything can happen!

Django Craig is a lyricist and music composer from Altadena, CA, USA.  He has previously released numerous spacey underground funk/ hip-hop albums that garnered a cult following in Southern California over the last 10 years.  This talented vocalist and multi-instrumentalist has performed with the likes of the Grammy Award winning group Ozomatli and musical legend George Clinton (Parliament/ Funkadelic).  His unorthodox approach to rhythm and synthesis add a natural organic feel to the sonic landscape that challenges the senses and moves the soul.  An avid crate digger and student of the funk, Django is our cosmic tour guide to infinity and beyond.  “AOTA is about tuning into a higher frequency and opening up parts of the mind and soul that need nourishment.  Our mission is to take you up, up and away.  We’re gonna blow the cobwebs out your mind….”

Ben Vera is an experienced DJ from Pasadena, CA, USA specializing in video DJing and music production.  His skills have graced stages and clubs in over 30 countries as well as radio airwaves in multiple countries.  Ben has also been on the cusp of future technologies working with experimental video programs, stereo 3D  and video DJ systems on major tours.  His skills have been utilized on some of the largest stages in the world by artists like Steve Aoki & members of the Grammy Award Winning group Black Eyed Peas.  Still fascinated with recording engineering and sound design Ben is constantly crafting unique sounds.  “My favorite thing to do while mixing during this show is to try and play the most unpredictable and unheard of monster jams that you would never hear anywhere else.  A DJ set perfect for sampling, dancing or freestyle rapping”.